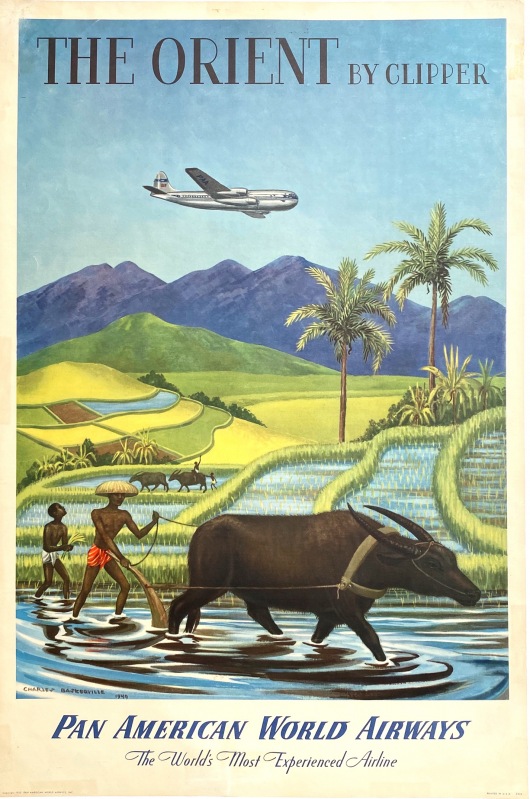 BACK TO Rest of Asia
Share this item
Prev | Next

Printed in the USA
Lithograph
71cm x 107cm
1950
Grade: B+, Very Good. Linenbacked. Browning in borders, pinhole tears restored at top edge.
T3825
Charles Baskerville was best known as a portrait painter. Among his subjects were Jawaharlal Nehru, the King of Nepal and Cornelius Vanderbilt. He was commissioed by Pam An to produce art work for several posters including for Siam, Pakistan and India as well as this beautiful painting of farm workers in the paddy fields of the Philippines.

Pam An initially opened trans-Pacific routes in the mid 1930's, operating flying boats from San Francisco to Manila (with numerous stops en route) and on to Hong Kong. Shortly after the Second World War, in 1947 Pan Am commenced scheduled round-the-world flights which included Asian stops in Manila, Bangkok, Calcutta and Karachi. The Round-the-World service was operated with DC4 aircraft, though this Pan Am Orient poster shows a Pan Am Boeing 377 Stratocruiser.